On the day when Google unveiled Nexus 5 Smartphone, it listed the phone on Google Play Store India page as well with pricing details. But the availability status remained ‘coming soon‘ till yesterday’s night. There were rumours about some limited stocks coming to Google Play for 16 GB version of the phone.  And finally, today, Google Play Store’s status for Nexus 5 (both 16 GB and 32 GB) changed to “Add to Cart”. Yes, the new Android KitKat phone Nexus 5 is now available to buy on Google Play Store India. Apart from that, the latest Nexus 7 (including LTE version) tablet is also available to order. 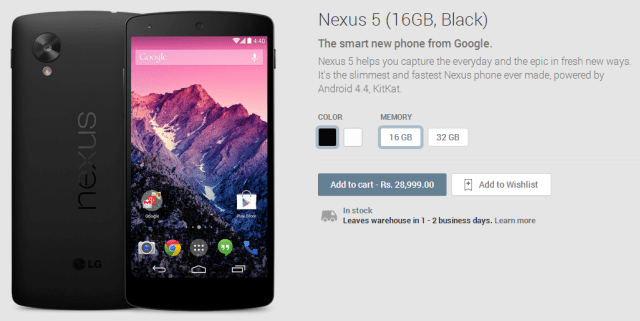 Google India processes and ships the Nexus 5 phones from its Singapore office. As per the details sent by Google, my Nexus 5 order will process and ship from the below address,

The first stock may not last for long because of the huge demand of this phone in Indian market.

Google Nexus 5 is packed with Snapdragon 800 2.26 GHz processor, Full HD IPS 5″ disaplay panel, Dual-band Wi-Fi, 4G LTE, 2 GB RAM and much more. In software side, it is having Android 4.4 KitKat. The phone in terms of software and hardware has received a very good feedback from reviewers and is one of the most recommended phone in this price range.

Google has also made the 3 variants of new Nexus 7 tablets in India. If you are looking for a 7″ tablet, Nexus 7 is again the best tablet in this price range.

Sanjeev Mishra is a professional blogger and an Internet Marketing Consultant based in India. He has built the Internet Techies to provide you updates in technology and web application area.
Related ItemsIndia Infonexus
← Previous Story Run WhatsApp and WeChat Apps on PC or Laptop
Next Story → Safeguard Valuable Items using Android Phone as Anti Theft Alarm System and Tracking Device