Apple has finally released iOS 4 Software Update for iPhone 3G, iPhone 3GS, iPod Touch. iPhone 4 will come with iOS 4 only. In WWDC 2010, Steve Jobs announced iOS 4 as their new operating system for iPhone and iPod. He also announced iPhone 4 in the same conference. iOS 4 is having lot many new features like multitasking, Folders, Tap to Focus Video and 100 more features. 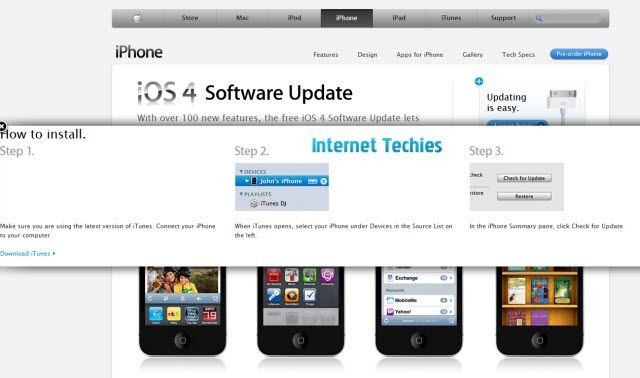 iPhone and iPod users can go ahead and update their OS with installed iTunes on their computer. Once you will connect your device with computer and launch iTunes, it will show you that “A new version of iPhone software is available (version 4.0). To update your iPhone with latest software, click update”.

Once you will click on update, it will start updating your iPhone OS with iOS 4 files and data. Go ahead iPhone and iPod Touch user and update your OS with iOS 4.

If you are not having iTunes on your computer then download iTunes for Mac or Windows computer from the link provided below.

Note: iPad users will have to wait for couple of months to get iOS 4 on their device.