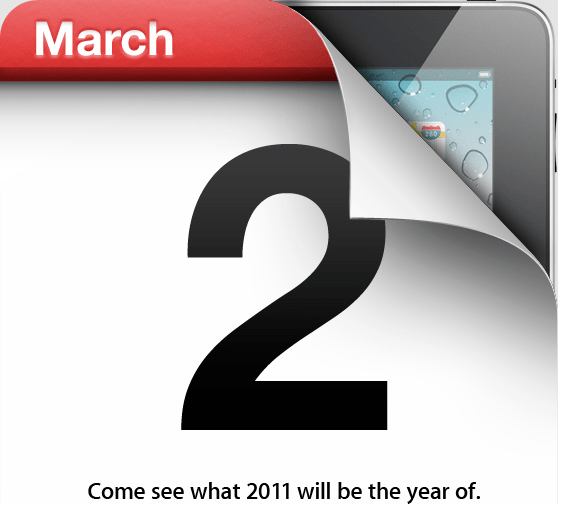 The most rumored, much awaited next generation iPad by Apple is finally coming on March 2, 2011. Yes, iPad 2 is just few days away from being unveiled. Rumor about the March 2 launch started from All things Digital’s Kara Swisher’s report. And finally Apple has sent the invitation for an event scheduled for March 2, 2011 at Yerba Buena Center of Arts Theatre in San Francisco. The invitation banner says all about the purpose of this event.

After hearing about the technical specifications and capabilities of recently announced and ready to release Android tablets like Motorola XOOM, LG Optimus Pad, Samsung Galaxy Tab 2 etc., the expectation from Apple has increased. There is no doubt that people at Apple are very much aware of the competition and expectations. So apart from great quality, this time we can expect more features and quantity as well from Apple. Anyway, based on the rumors on web, this is what may come with ready to launch Apple iPad 2.

– Front and back camera for FaceTime chat

– Much lighter than the previous versions

Unlike Google and Microsoft; Apple does not believe in live streaming its events, this is what we have seen in past. But they have a page to showcase events. It is possible that Apple will live stream this event as they also know the curiosity of people about iPad 2. Here is the page where you can check the live streaming on D-day.

You will definitely find the recording of the launch event on the above page uploaded after few hours or the iPad 2 event.

Anyway Blogosphere will provide the live coverage of the event by tweets, live broadcasting where you will be able to get updates, snaps from the launch event. Mashable, Macrumorslive.com, Engadget, live.gdgt.com are places where you will find live updates on the launch day directly from the venue.