iPhone OS 4.0 beta 4 is already available to download and it can also be jailbroken. it is going to be on iPhone, iPod Touch and iPad. iPhone Dev Team is already working on Jailbreaking this latest beta and guess what, they succeeded to jailbreak this beta on Apple iPhone 3G thru readsn0w 0.9.5 beta. 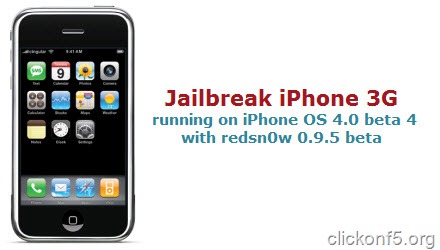 This is a beta release of redsn0w targeted at developers of jailbroken apps. It uses the same pwnage2 DFU-mode exploit that we’ve been using since the 2.x days. Nothing new is revealed to Apple, and it’s not applicable to the iPad. Don’t go near it if you use yellowsn0w, ultrasn0w, or blacksn0w.

Please not that this beta is not meant for the average end-user. There are many things “broken” with jailbroken apps in the 4.0beta1/beta4 environment right now (that’s the real reason we showed “Veency” in the 4.0 jailbreak demo video back on April 9, instead of say MobileTerminal.app, which is broken!). This beta redsn0w allows the developers behind those jailbroken apps (like MobileTerminal.app!) to fix their software before the general public gets iphoneOS 4.0.

Supported devices for this released beta