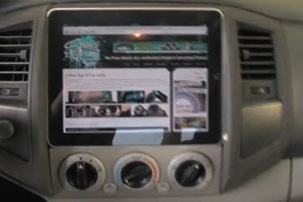 Apple iPad is awesome gadget, in fact the most talked about gadget of this year i.e. 2010. Many of you have been using this gadget for different purposes depending on your choice of app. Like any other buyer, Doug Bernards also bought an iPad for him but he was having some other plan for that. He was planning to install that iPad on the dashboard of one of his car. Imagine yourself navigating things on iPad while driving your car. It will also work as GPS by opening Google Maps App on iPad.

Here is the video showing Doug following the step by step process to install new iPad on dashboard of his car.

Even he developed some small gadget for controlling the volume of the music players on iPad.