Do you feel that your system is working very slow while opening so many tabs on Google Chrome or other running browsers like Firefox or IE? Specially if you are using latest browsers on an older computer with 2GB or less RAM (system memory) on Windows 7 machine. Then you should check the system memory utilized by the browser to keep an eye on the physical and virtual memory utilization. Google Chrome, Firefox etc. are having option to show system memory distribution for each opened tabs, extensions, apps etc. You can find the utilization details over there, but that will not give you details about the physical and virtual memory distribution of each tab or app. Google Chrome is having a feature to show system memory utilization by all running browsers and their tabs, apps, extensions etc. on single window. 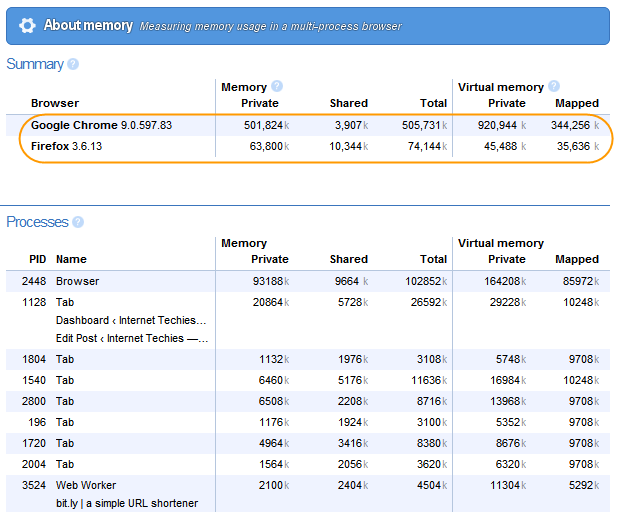 You can get this kind of details about memory usage by running browsers by typing “about:memory” in the address bar of Google Chrome. It will show you the distribution of physical and virtual memory utilized by different browsers. As Google Chrome is the fastest browse at this time, it uses more memory as well. That’s why it is suggested to open few tabs only at a time on older PC to keep them running or to avoid browser crash.

Note: Windows default application “Task Manager” only shows the memory consumption by every running application but not in such a detailed way for browsers.