Google Chrome is leading the browser war in many ways like performance, speed etc but still it is missing some native features. For example, one can’t read or subscribe RSS feed on Chrome browser. When you will try to access any feed like https://www.clickonf5.org/feed, you will get content in a code format unlike Firefox, Safari and IE. But there is an extension released by Google only to make feed readable and even one can subscribe for different platforms like Google Reader, My Yahoo etc.

RSS Subscription Extension by Google is an extension for Google Chrome to make the browser read RSS feeds of different sites. Once you will install this extension, you can try opening the same feed link provided above in the pos and then you can see the difference. Subscription options appearing on the feed after extension installation are Google Reader, iGoogle, My Yahoo, Bloglines etc. If you want to add any other subscription options like netvibes, pageflakes, feed demon etc then click on “Manage” at the bottom of the subscription option list and there you can add and remove options as well. Here is the screenshot of RSS feed of Internet Techies appearing on Chrome after extension installation, 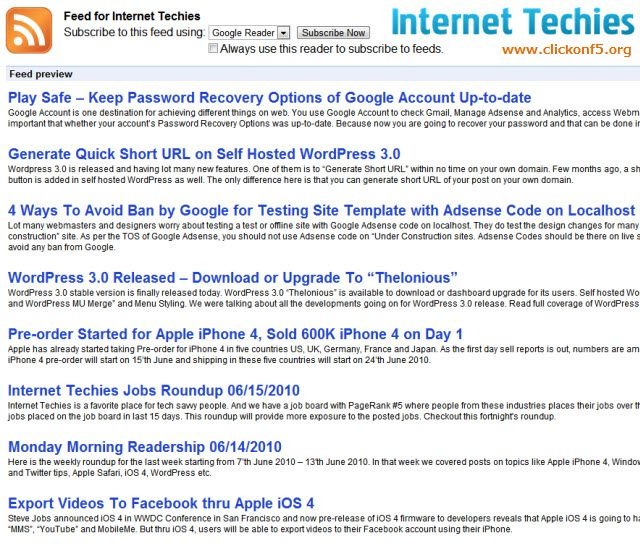 Otherwise without installation of this extension, the RSS feed of Internet Techies was appearing as below on Chrome,

Before Installing Extension for RSS Feed on Chrome

If you want to get the red RSS button on Google Chrome like IE and Firefox then here is an extension to get that red color button on the address bar of Chrome.

We originally intended to include RSS support by default as a native feature of Google Chrome (and we still might in the future) but we decided instead to implement this as an extension. This decision was made based on our philosophy of trying to limit ourselves to adding only the UI features that a vast majority of users need and allow each user to customize the browsers to fit their needs with Extensions. Given that most people are not familiar with and don’t consume RSS feeds, we thought that RSS support would be a better fit as an extension, at least to begin with.

We don’t know whether Google will add native feed reader in Chrome by default in future; but this extension does the same thing without any issue. So go ahead and install this extension on Chrome browser to read and subscribe feed of your favorite site or new findings thru Chrome.

Sanjeev Mishra is a professional blogger and an Internet Marketing Consultant based in India. He has built the Internet Techies to provide you updates in technology and web application area.
Related ItemsChromeextensionfeedgoogle chromerss
← Previous Story Play Safe – Keep Password Recovery Options of Google Account Up-to-date
Next Story → How To Index Documents of Google Docs on Search Engines