By Sanjeev Mishra on February 9, 2009@sonziv

YouTube is going high and the distances from the competitors are getting bigger and bigger. 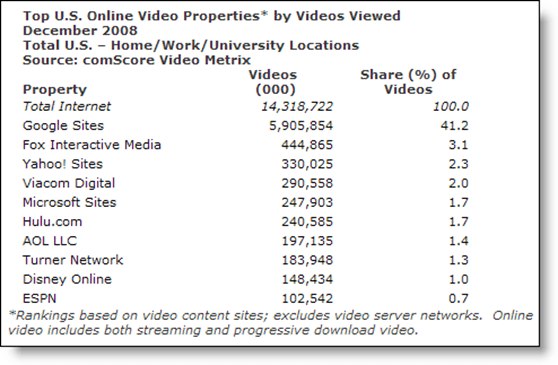 Other notable statistics from the report are:

Google is now market leader in many sections of Internet and will continue doing so in future as well. Competitors like Yahoo, Microsoft, Fox will have to come up with some new and interesting ideas for existence.  Kindly let us know your views in this regard.

Sanjeev Mishra is a professional blogger and an Internet Marketing Consultant based in India. He has built the Internet Techies to provide you updates in technology and web application area.
Related ItemsGooglevideoYouTube
← Previous Story Learn how to use Google Latitude on your phone or PC
Next Story → Google will help you reducing your power usage by PowerMeter