YouTube is now 5 years old and serving 2 billion views per day. Figure is awesome for the 3rd most visited website in the world. Revenue for this video portal is crossing 1 billion per year and that will definitely make YouTube a profitable section for Google.

According to the latest update on YouTube’s blog,

Five years ago, after months of late nights, testing and preparation, YouTube’s founders launched the first beta version of YouTube.com in May, with a simple mission: give anyone a place to easily upload their videos and share them with the world. Whether you were an aspiring filmmaker, a politician, a proud parent, or someone who just wanted to connect with something bigger, YouTube became the place where you could broadcast yourself.

YouTube’s first uploaded video shows the simplicity of this community. This video was uploaded on 23’rd April, 2005. Titled as “Me at the Zoo” is featuring YouTube’s co-founder Javed Karim at the San Diego Zoo.

As per the report in March 2010, YouTube was expected to generate $945 Million in 2010 compared to $727 Million in 2009. But the latest data from YouTube that it is serving 2 billion views a day, the revenue result will definitely cross 1 billion mark in 2010.

Here is the special YouTube Timeline chart published on YouTube’s blog showing growth of this awesome portal: YouTube.  Click on the image to see full version. 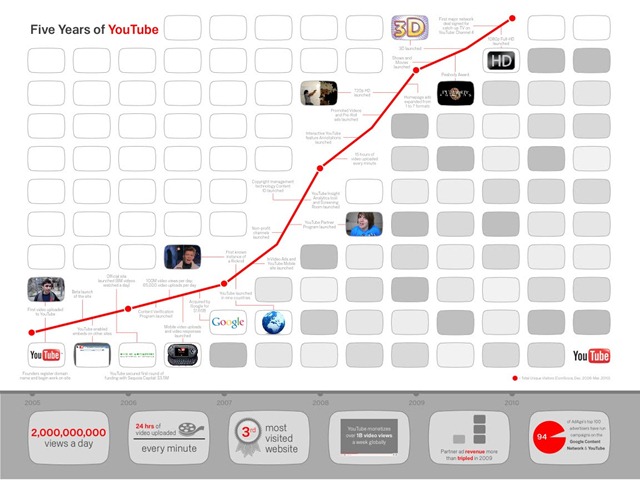 Congratulations YouTube team for this awesome achievement. There are lot many tubes available on Internet but none of them are near to YouTube.