According to the Airtel 4G webpage, the company is going to offer 40Mbps download speed to its customer as 4G LTE-TD (Time Division LTE) technology is capable of offering up to 100 Mbps download speed and 40Mbps upload speed. But the question is whether customer will get this much download speed on their 4G devices while surfing the web? Answer is very straight, No. 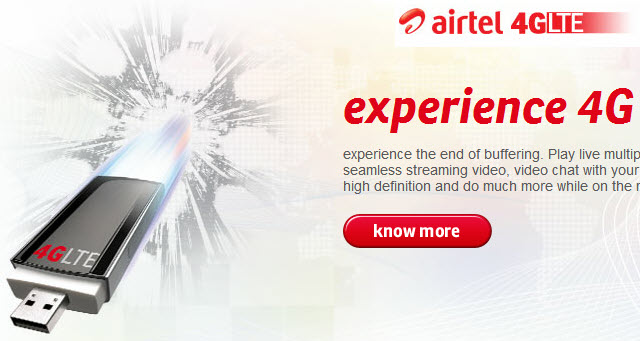 4G LTE is already available in different parts of world like United States, UK etc. And if you go by the experience of People already using 4G network on their devices, you would find that they actually never get a speed near to even 20 Mbps.

Here is a video demo showing Verizon 4G LTE network speed (download and upload). We should expect the same from Airtel 4G LTE as well.

As per the terms and conditions of LTE network provider,

Apart from the above mentioned factors, the distance between your device and the mobile tower does also play an important role. In case of LTE, a single tower may cover area around 100 KM but of course the coverage and signal strength will diminish in metros and cities where you find lot many distractions in between.

What to expect from Airtel 4G LTE connection?

Like other 4G LTE service providers, Airtel will also give you a speed of around 5Mbps to 15Mbps depending on the factors explained earlier in this post. This speed is good for those who wants to download huge games from web, upload HD quality videos or even stream them on bigger screens, stream online TV in living room using Google TV or Apple TV etc. I have seen people getting 2Mbps of download speed on 4G network as well, so don’t get super excited after purchasing a 4G network.

Airtel promises a download speed of 20 Mbps on 3G network but do you really get 20 Mbps on that? Then why should we believe this 40 Mbps or 100 Mbps promise.

Small Business Owners in India can get Free .IN Domain and Hosting from Google