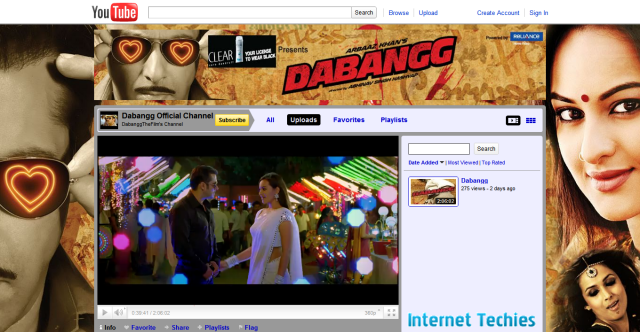 Dabangg is the first blockbuster Bollywood movie which is available on YouTube to watch for free in just few months of DVD release. Arbaaz Khan Productions and Shree Ashtvinayk Productions has officially uploaded this 2010 blockbuster Salman Khan and Sonakshi Sinha starrer movie Dabangg directed by Abhinav Singh Kashyap on YouTube under the partnership with this popular video streaming portal and production house. As piracy is the biggest problem for Bollywood producers, this initiative will definitely help them reach with quality print to maximum number of Bollywood fans and viewers. YouTube is already hosting more than 50 Bollywood movies which are available to watch for free, and Dabangg will definitely set a new path for future releases from Bollywood.

YouTube is having a channel named “dabanggthefilm” where this complete movie is uploaded and ready to play. The production house is going to earn money through advertisements under YouTube partnership. Salman Khan’s Dabangg crossed 100 Crore earning in September 2010 and it is still very much popular in some segment of Bollywood lovers. There is no doubt that Dabangg was the biggest hit of year 2010 and the name “Robinhood Pandey or Chulbul Pandey” is very famous.