Norton Internet Security and AntiVirus 2011 is much lighter than the previous versions. Of course the effectiveness of filtering the attacks is much powerful in this new version as well. Downloaded files are safe with Norton Insight Download feature included in 2010 version which has been improved a lot in 2011 version. 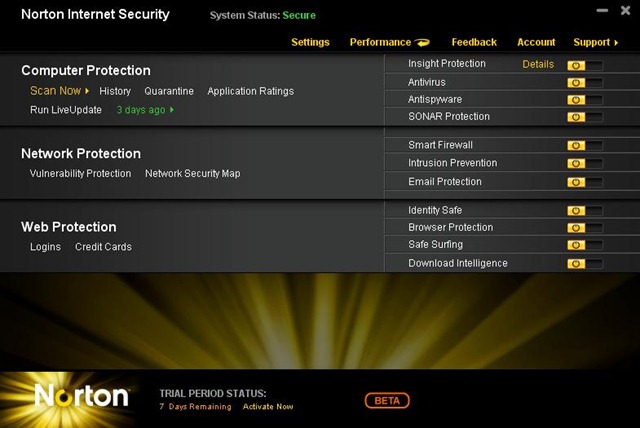 These products are available to download for free because these are pre final release version. These are beta versions released for testing purposes. You can request the download and then you will be provided with the download link in your email Inbox. For personal computers, you may use this version for protection as well but if you are dealing with some financial or critical data on your computer then it is recommended to use stable version. Current stable version is Norton 2010.

To download Norton Internet Security 2011 and AntiVirus 2011, use the below mentioned link to fill up the forms and then you will receive the download link thru email.

[Update – If the above links are not working for you, then download the 90 days Norton Internet Security 2011 from this link and Norton Antivirus 2011 from this direct link]

Earlier we had published a list of 12 Free AntiVirus software to install on your PC. If you don’t want to go for Norton 2011 products right now, then you may try those free antivirus software as well.

Sanjeev Mishra is a professional blogger and an Internet Marketing Consultant based in India. He has built the Internet Techies to provide you updates in technology and web application area.
Related ItemsbetafreeFree DownloadsInternet Securitynorton
← Previous Story Download Norton Internet Security 2010 Free Subscription for 90 days [Updated]
Next Story → Best Antivirus Software of 2014 to Protect from Threats and Cyberattacks