Here is the screenshot of the Airtel.com page, 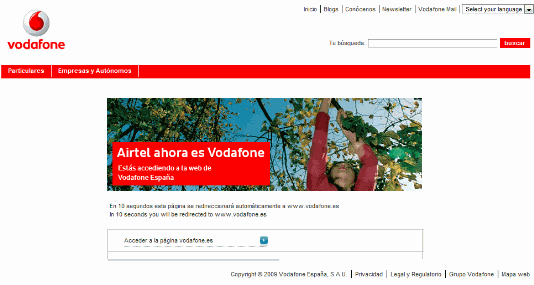 Airtel India is having website as airtel.in which is not having information about this transaction and that’s why it is not even part of that transaction. But still you can see that Airtel Is Now Vodafone on Airtel.com page.

Actually airtel.com page is getting redirected to Vodafone page within 10 seconds and between that you can see the message as “Airtel Is Now Vodafone” in Spanish.

Go ahead and see the page “Airtel.com”, this is really funny.

Sanjeev Mishra is a professional blogger and an Internet Marketing Consultant based in India. He has built the Internet Techies to provide you updates in technology and web application area.
Related Itemswebsite
← Previous Story Twitter Home Page Focusing On Real Time Search
Next Story → Are You Planning To Break Your Computer? These Videos May Help