Mozilla has released the Release Candidate of latest Firefox 4 i.e. Firefox 4 RC and is available to download and try. I installed this RC 3 days ago and since then spent hours on this new version and here is my review and experience.

Here is what you will get new in the latest version,

Apart from these visible changes, there are few improvements in the browser to make it faster than the previous versions. Additional supports include HTML5 support, HD video and WebM format support, WebGL for 3D Capabilities and much more.

I use Google Chrome as my default browser and here is how I find Firefox 4 RC in last few days,

If you are using Firefox since a long time as your default and the most used browser, then you will see a new UI which looks much cleaner than the previous versions. Now a days people want better utilization of available display real state and Firefox 4 does the same by providing more space to the web pages. In this new UI, your focus will be on the opened pages and it is looking much better than the previous versions. I am sure that people will raise eye brows on this change and have different opinion, but to me it looks much much better. 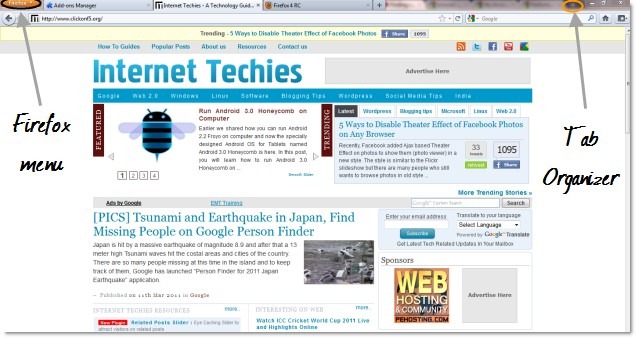 Anyway, you can get the previous look and feel by customizing the browser.

You can organize opened tabs in Firefox 4 by grouping them. On the tabbing bar, you can see a small down arrow. Click on that to get the Tab Groups. Or you can use keyboard shortcut Ctrl + Shift + E to open Tab Groups. There you can reorder the tabs by dragging them. This is a nice feature to have as you can open and close a particular group of web pages or tabs in single click.

Sync Firefox to have same feel on different devices

Like Google Chrome, you can sync the firefox browser to have the same data and feeling on different devices. Whether you are using Firefox on your home desktop or work laptop or other devices, you can just sync with your Firefox account and have the stored data and feeling on the new device. Firefox sync synchronizes Bookmarks, Settings, Installed Theme, Stored Password etc. on different devices. This very is very useful for those who use more than one computer to browse the web. 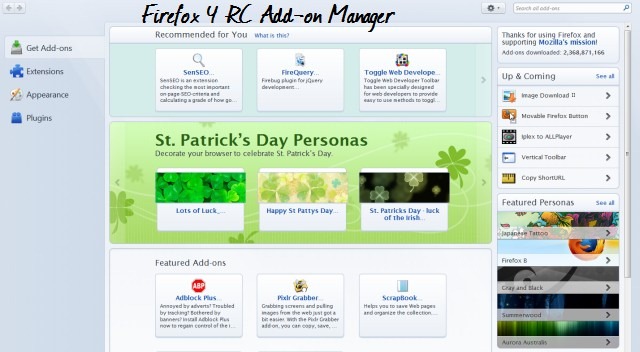 Firefox 4 is having a very rich add-on manager where you can see medium size icons of available add-ons. There are different sections like “Featured Add-on”, “Recommended for you” and Themes. There is a section called Featured Persona to install persona on your Firefox. New Add-on manager is much better than the previous one in looks and feel. Yes, of course there are more sections in this new manager but the basic feature is more or less same as the previous versions.

What’s Hot and What’s Not in Firefox 4

Apart from the add-on installation, Firefox 4 is having some serious issue related to CPU usage and memory consumption. Once I complete the installation of Firefox 4 RC and started browsing few sites for the first time, my system (dual core processor, 4GB DDR2 RAM) hanged and restarted automatically. As this Firefox 4 is still not the stable version so that may happened because I was testing the RC. Hope to not get this kind of problem after final release.

Anyway, overall the Firefox 4 seems much better than the previous versions and will keep Firefox going in the current browser market. Firefox 4 is performing much better than IE9 on my system but still I prefer to browse web on Google Chrome.

Post your feedback about the above review through comments.