Google Chrome is now the no. 1 browser Worldwide as it defeated Internet Explorer last week in terms of serving the total web traffic. According to the statcounter report (attached below), Google Chrome was used for opening approximately 32.76% of total web traffic around the world. It went ahead of Internet Explorer which was used to open approx. 31.94% of total traffic. Mozilla Firefox is at third place with 25.47% of traffic share. 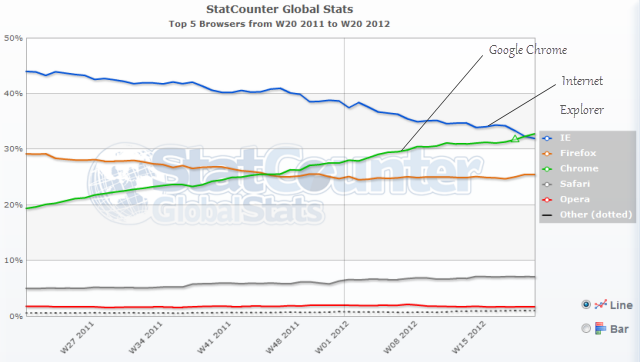 How big is this achievement for Chrome?

Oh, this is a huge achievement for Google Chrome team. As you can see in the graph attached above, just before a year time, Google Chrome was standing at third place with around 20% of web traffic share. In one year, it is the top most browser worldwide. The full credit goes to the Chrome team for providing the best possible technology and user experience in this browser and make a happy web browsing experience.

Google Chrome was launched in year 2008 and since than it started gaining market share of web browsers. It was the same year I started this blog and I covered the advantages of Google Chrome in my very first post.

What went good for Chrome? 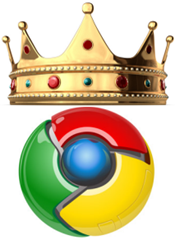 Speed, User Experience, Development Tools, Extensions….. and the list goes on. Google Chrome is very fast as compared to the other browsers (including Firefox). With WEBKIT Rendering Engine, Google Chrome is the fastest browser right now.

For development tools, I understand that many web developers prefer Firefox with Firebug and other add-ons, but I find inbuilt tools like inspect element of Google Chrome very handy for small CSS or HTML changes. I know that you may have different opinion on it.

I think Google Chrome will keep dominating the web browser market in future as well. After a year from now, We may see IE having around 25% of web traffic and Google Chrome near to ~40% of total web traffic. Firefox is more or less stable at ~22%. But we should not forget that IE 9 is getting positive reviews and feedback from users and with Windows 8 and IE 10, Microsoft will try to gain more traffic share for its own browser. Mozilla is releasing updates for Firefox in nearly every 15 days and it will also try to compete with Chrome and IE. We will have to wait and see how these web browsers perform in future but right now it is Google Chrome which is leading the battle with no doubt.

Share your views and thoughts about this achievement of Google Chrome and what do you think will happen in future.