By Sanjeev Mishra on February 2, 2011@sonziv

Internet is back in Egypt and social networking sites which were blocked are now available. Because of the violent protests by Egyptians, Government has decided to black out the Internet in country to cut off communication from outside world. People were using Proxy servers and VPN services to access blocked sites but once the Internet connection stopped, those tricks were of no use. Anyway, now Internet is back and the traffic on Google services like Search is visible on Google Traffic Transparency Report. 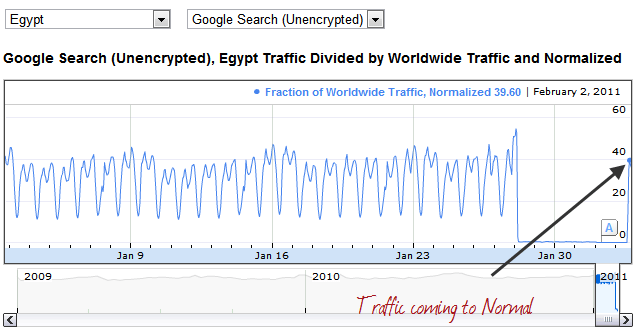 Checkout the Transparency Report by Google

After service block, Google announced “Speak-to-tweet” service which enabled users to connect to twitter using their phones. As Twitter plays very important role in reporting and outside world was very much updated because of that service.

Sanjeev Mishra is a professional blogger and an Internet Marketing Consultant based in India. He has built the Internet Techies to provide you updates in technology and web application area.
Related Itemsaccess blocked sitesInternet
← Previous Story Google, Facebook, Twitter, BlackBerry Services, SMS blocked in Egypt, Use VPN and Proxies
Next Story → 7 Online Plagiarism Checker to Find Copied Contents