Brazil vs Netherlands is the first match of quarterfinal i.e. final 8 of FIFA World Cup 2010. You can watch the match online live for free. Brazil is no doubt the favorites but Dutch team is also performing pretty well in this tournament. 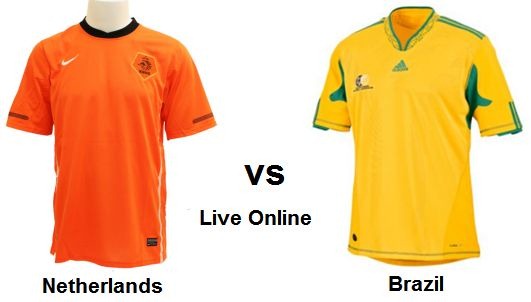 We have already shared official and unofficial sites to watch the FIFA World Cup 2010 online. As the game is now in the interesting phase where quarter finals are starting where final 8 teams are Brazil, Netherlands, Uruguay, Ghana, Spain, Paraguay, Argentina and Germany. Quarter finals are starting from 2’nd July and the first game is between Brazil and Netherlands.

Argentina vs Germany match is scheduled for 3’rd July. Probably that will be the most interesting game of quarter finals of FIFA World Cup 2010.

You can watch highlights of the game on this page as well.