Last year Indian government approved a standard symbol for Indian Rupee. After few months, Unicode Consortium assigned a unicode to that symbol so that it can easily come to the keyboards. Like $ US dollar sign, Indian financial system will use this new rupee symbol in daily use. Even people already started using the symbol in newspaper advertisements and even on blogs and websites. And in fact there were few special fonts available for Indian rupee symbol. But still the update was awaited from Microsoft to use the symbol with common fonts like Arial, Times New Roman etc. Finally Microsoft has released an update for Windows 7, Vista, Server to type the Indian rupee symbol in normal and common fonts. 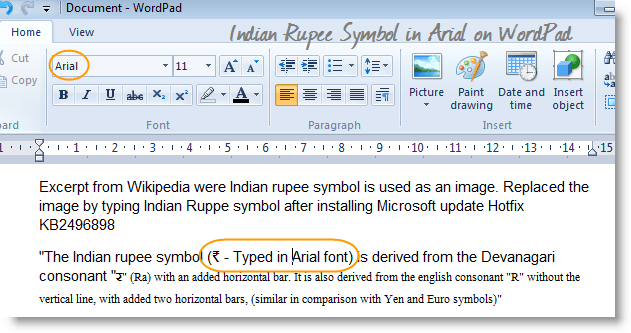 How to type Indian Rupee Symbol in MS Office

First of all download the update (Hotfix KB2496898) released by Microsoft. It is available for free but you the condition is that you should have genuine Windows copy installed (you need to validate before downloading the update) on your system.

After installation, your Windows PC will reboot i.e restart to complete the installation procedure.

Now open Microsoft Word on your computer and then type 20b9 and then without hitting any space, hit Alt + x on your keyboard. The number will change into Indian Rupee symbol. U+20B9 was the unicode assigned by Unicode Consortium.

In case you are finding it difficult to follow the above procedure, you can watch the below embedded YouTube video for more details.