The next version of Windows operating system i.e. Windows 8 is getting ready for the first beta release. Microsoft is very much excited about this version and few days ago, they released the first preview of Windows 8 build (demo video attached below). On the lock screen, an icon of a webcam was visible where a number was popping beside that icon. People started looking for the details about that icon and found that it is a video chat in-built application’s icon. And the number shown beside the icon is nothing but the number of missed calls received through the video chat application. That means, Windows 8 is coming with a built-in video chat application. Windows 8 is also coming with an in-built PDF reader. 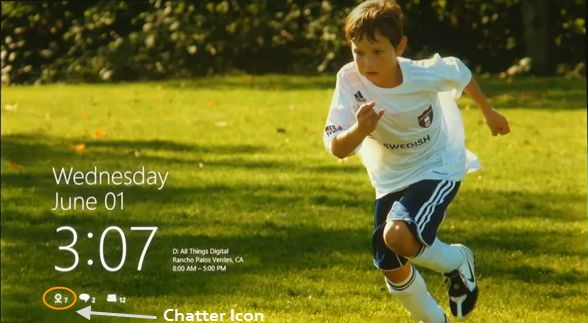 After digging more into the released builds, developers found the code which gives more clue about this video chat application. The name of the application is written as “Chatter” and it is capable of making calls from different platforms like Skype, Google Talk and Windows Live etc. Skype integration in Windows 8 is no surprise after the acquisition of Skype by Microsoft a few weeks ago.

That means, the user will have one place to audio – video chat, instant messaging and for conference calls. Just need to open single native application for all of these activities.

Sanjeev Mishra is a professional blogger and an Internet Marketing Consultant based in India. He has built the Internet Techies to provide you updates in technology and web application area.
Related Itemsvideo chatwindows 8
← Previous Story Solution for Common Problems on Windows 7 Visualized [Infographic]
Next Story → How To Speed Up Download Process with Microsoft Download Manager