We all know that Facebook is the place for socially addicted people and we spend so much time accessing it. We make friends, share pictures and videos, post comments and show our like and dislike. But if you want to know the statistics or facts related to Facebook then you should know where to go. Facebook is having a dedicated page for statistics related to itself. Go to this page and checkout the details.

In serving pages, there is no doubt that Facebook is ahead of any other social networking sites. As per the report in January this year, Facebook serves 470 billion page views per month. Facebook is having more than 50,000 server to hold and serve this much data.

As per the Google Ad Planner, here is the screenshot of the data showing for Facebook as on February 2010. 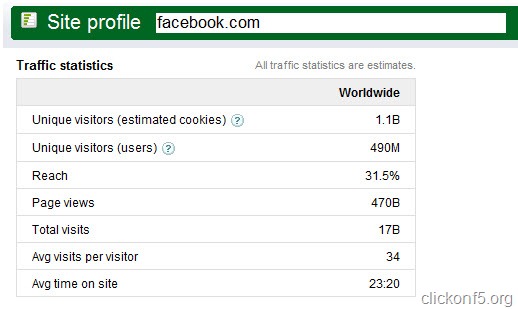 Facebook is serving 17 times more pages than its nearest competitor “MySpace” which is serving around 27 billion page views a month. These stats are more than sufficient to declare Facebook the leading social networking site and one of the popular site worldwide.