Facebook Places now Working in India on BlackBerry and iPhone

Facebook Places is a well known feature for users in countries like US and UK. Finally it is working in India as well. Facebook Places is a Check-In based feature of Facebook to let your Facebook friends know about your current location. Yes, it is a competition for Foursquare like location based service but it is limited to Facebook only.

Today, I tried Facebook Places on my BlackBerry and found the current check-in status of my friends. Then I tried to check-in to my nearest location (in my case it was my office only) and I was able to do so. FYI, my office is located in India only. If you are planning to start using Facebook Places, then read the important privacy settings to use the same securely.

Here are some screenshots from my BlackBerry device which is having Facebook App for BlackBerry by RIM, 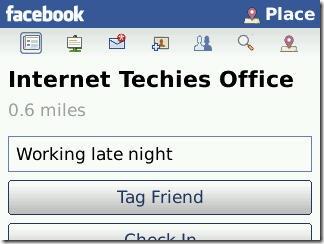 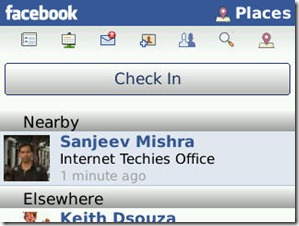 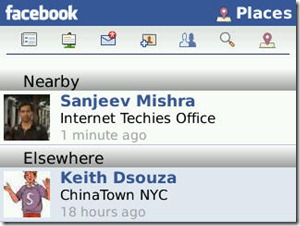 As per few tweets on Twitter, folks in India are able to use Facebook Places on their Apple iPhone as well. Here is a tweet confirming the same.

Update – Able to load the check-ins on Android phone by hitting “Refresh” but not able to Check-In using Android.

I tried the Facebook for Android and still got the message as “The feature will be available in your region soon. Thank you for your patience”. Not sure about Windows Phone 7 and HP webOS devices. Hope to get the feature soon working on these devices as well.

Here is a screenshot of Facebook Places on iPhone working in India. One can create or add a new place as well. 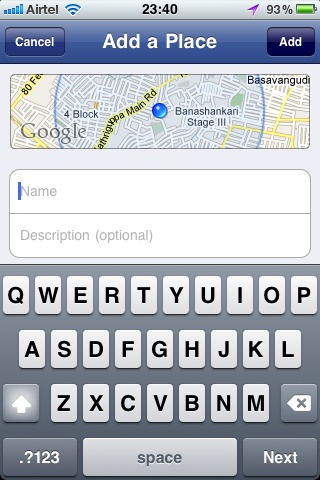 Thanks @msigeek for sharing this screenshot.

Sanjeev Mishra is a professional blogger and an Internet Marketing Consultant based in India. He has built the Internet Techies to provide you updates in technology and web application area.
Related ItemsandroidBlackBerryfacebookiphoneMobile
← Previous Story 5 Ways to Disable Theater Effect of Facebook Photos on Any Browser
Next Story → Promote your Website or Brand on Facebook Profile by Smart Photo Tagging