For protection from malicious programs, you need antivirus software installed on your computer. Here are some free antivirus programs or software to download and install.

If you are looking for a free antivirus software for your computer then here is the ultimate list of 12 free antivirus software to download. You can use the 90 days trial version of Norton Internet Security at any point of time. But after those 90 days, you may use any of them if you don’t want to purchase the license copy for Norton or any other paid programs.

Here is the list of 12 free antivirus software with detailed descriptions and compatibility:

Microsoft has recently released a free antivirus software which is really effective. Installation of this tool doesn’t take more than couple of minutes and the system load is also very less. If you are a normal user and like to have a free antivirus program then you can try Microsoft Security Essential. 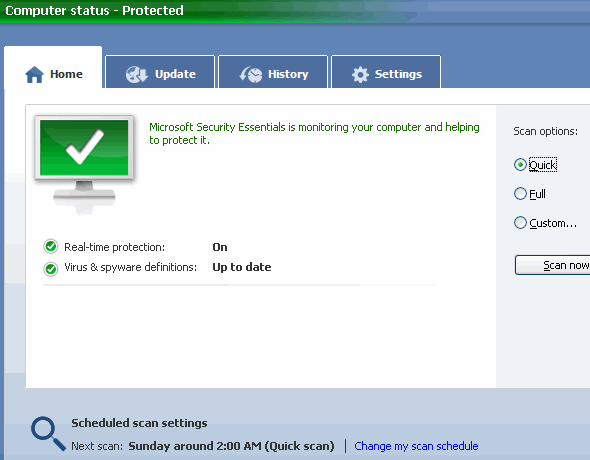 Most popular free antivirus program which is an award winner program for scanning a system for free. You can always trust AVG for virus protection.

According to BitDefender release note,

BitDefender Free Edition uses the same ICSA Labs certified scanning engines found in other BitDefender products, allowing you to enjoy basic virus protection for no cost at all.

Avast Antivirus is free for non commercial usage. This antivirus is one of the biggest competitor of AVG and it is growing rapidly.

Use Antivir to protect your computer from viruses, worms, trojans etc. Free version is available to download.

Very simple but powerful antivirus where you can just select the drive and scan that with anti viruses.

PC Tool Free Antivirus is tested program on Vista, XP, 2000 and it is an effective tool. According to the release note of PC Tool,

With PC Tools AntiVirus Free Edition you are protected against the most nefarious cyber-threats attempting to gain access to your PC and personal information. Going online without protection against the latest fast-spreading virus and worms, such as Netsky, Mytob and MyDoom, can result in infections within minutes.

Small Antivirus firm but effective. You can try the free antivirus program supported by Immunet community.

One of the best free Antivirus in the market and recommended by PC magazine as well. According to the Collective Intelligence Monitor,

Another free antivirus program which is very much recent but nicely build.

Rising is anther free antivirus software thru which you can scan your system and protect. It is also in its initial stages and currently they are having 2009 version available to download.

If you are aware of any other reliable and free Antivirus program then share your thought thru comments section of this post.

Not Sure If Your PC is Infected with Malware or Virus? Use Free Scan Tools from Market Laders