So now we people on Windows should now feel luckier because Skype 5.0 Beta is released with Group Video Calling feature and this beta version is currently released only for Windows OS. You can download it from here. For Mac and Linux, they are still working on the Beta version and it may come out sooner, they say.

You and four of your friends, family members or business colleagues can participate in the group video call simultaneously. All of you five should have Windows OS with Skype 5.0 Beta installed. It currently supports Windows XP and Windows Vista. It does not support Windows 2000 as well there are some known issues on Windows 7. As it is in beta version, and they are accepting feedback from users and the beta version is vulnerable to all kind of bugs, they have kept the Group Video Calling free. So come on friends, we should make use of this free opportunity as much as we can and whenever we need, because once the stable version is released, definitely they will be making us pay for the group video calling feature. One to one calls would be free, as always. 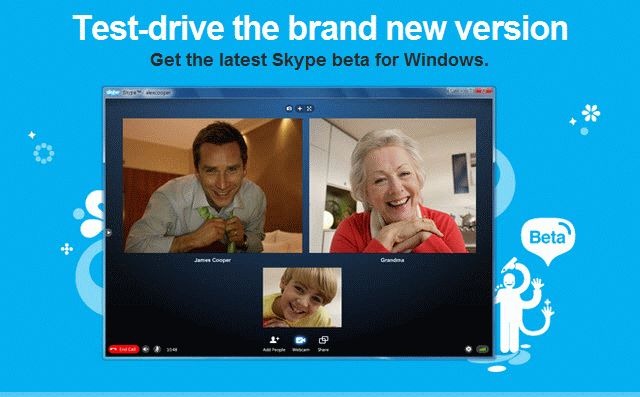 Be aware that group video calling is currently in ‘beta’ – this means that there might be a few rough edges, and that it might not work perfectly every time. We welcome your feedback – either in the comments below, on Twitter, or via our dedicated feedback survey. We’re planning to release an updated official version later this year, but if you’re keen to try it today, you can download the new version of Skype now.

Oh, and for those Mac users out there, don’t worry – we’ll be launching group video calling on the Mac later in the year too

Also in addition to introduction of group video calling Skype team have re-designed the call view. The new call view is focusing on the ongoing call and taking away all possible disturbing factors like other conversations and they can be made visible if required, as per their release notes. Some of the Skype users are finding this new change a bit frustrating and unnecessary. In fact some want Skype to take back these changes, i.e. they do not want other contacts, statuses, other conversations hidden by default.

So download Skype 5.0 Beta and enjoy free group video calling and do submit your feedback and in case you find any bugs on Skype issue tracker.