Task Manager on Windows is used to control the performance and applications memory consumption. One can end the process for an application to use the same memory for other. This way he can optimize the performance of his computer. There is no doubt about the speed of Google Chrome but it consumes so much memory.

Google Chrome creates different instance for tabs opened in Google Chrome. So when you will check the task manager, you will find more than one instance of Google Chrome over there and will be confused about which one to end to close a particular tab. Here is the screenshot of my Task Manager where you can see four instances of Chrome.

On windows task manager, it is no where written that which instance is there for a particular tab on chrome. That’s why it is bit confusing from there to end the process of a single tab. 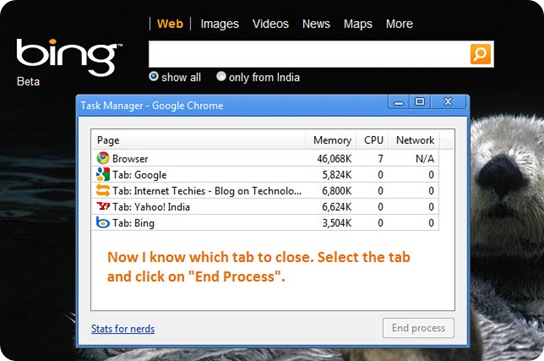 Choose from different bookmarklets for Google Chrome to get maximum from the browser. Still way to go for Chrome.

Embeded is the Video Tutorial For Same,