Around 18% of Fortune 1000 websites are having expired SSL certificates

By Sanjeev Mishra on February 8, 2009@sonziv 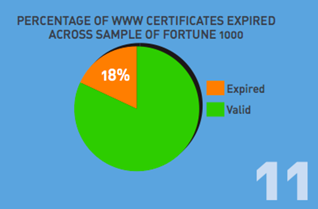 For those who don’t know what does SSL mean, SSL means Secured Socket Layer which was created by Netscape to ensure secured transaction between web servers and browsers. The protocol uses a third party, a Certificate Authority (CA), to identify one end or both end of the transaction.

Because of this, the Spam, viruses, spyware, phishing attacks are increasing rapidly now a days. The results are such that Spyware caused 850,000 households to replace a computer in the last 6 months. The detailed graph is like this,

Such incidents are an awakening call for those website owners to re-activate their SSL certificates so that people who are browsing their sites can go ahead without any fear.

Sanjeev Mishra is a professional blogger and an Internet Marketing Consultant based in India. He has built the Internet Techies to provide you updates in technology and web application area.
Related Itemsantivirussecurity
← Previous Story Online purchases are safe with Virtual Credit Cards
Next Story → How to use Google Docs, Adobe Buzzword and Zoho for online documentation and sharing