Get A Job At Twitter, Current Employee Strength Is 63!

If you are looking for a better job in social media, then the one of the most successful social media company is hiring people. Yes, We are talking about Twitter where current employee strength is 63 and of course this company is having a brighter future. 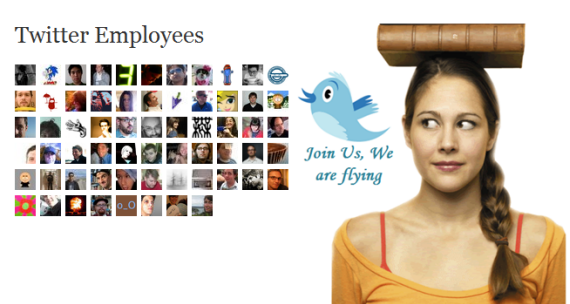 Twitter started as a side project in March 2006, and now it is a most common name in real-time short messaging service and micro blogging. Twitter is having offices in SoMA neighbourhood of San Francisco, CA. As per the data on Twitter Job page, currently there are 30 employees in this company but you can see the above attached Twitter Snap where the total number of employees are shown as 63. But still 63 is not the number they wants right now, they are growing rapidly and if they plan to lead the real-time search in future, the strength will definitely increase.

Some of the latest openings in Engineering and IT & Website Operations are as below: 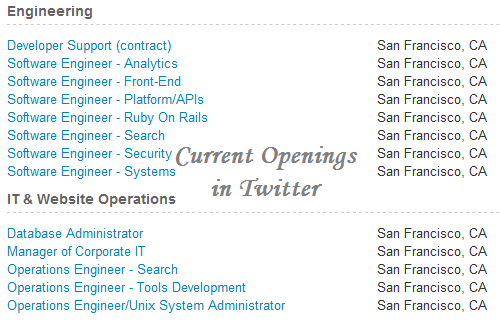 Engineering Section and IT operation should be your preferred choice as they are definitely the areas where Twitter will try to focus its operations. If you planning for a career in Social Media, then try to get a job at twitter. Work environment explanation available on Twitter page seems similar to Google or other open culture company. Below is an extract from there only,

Twitter Office premises are very open, has tons of windows (with views), collaborative workspaces, whiteboards-a-plenty, and just the right amount of meeting space. We provide the best equipment money can buy and offer free breakfast, snacks, and often lunch. Good burritos, great coffee, and Whole Foods are just blocks away. Sometimes we’ll walk to the park around the corner when we need to talk about something juicy or just get some fresh air (or a better burrito).

Twitter turned into incorporated company in May 2007, and till now it is really emerging as one of the most effective social media company. Recently they changed their home page and looks to attract more users. So what are you waiting for, go ahead and start twitting from Twitter Office, CA.