The Future man talked about future of social media optimization and networking on internet. Social networking tool like Twitter is having a good future and people are talking about it thru their blogs or websites as I am doing right now. I personally feel that the potential in 140 character expression thru twitter is tremendous and that’s why people discussed the same around 20 – 30 years before as well. The future man told a group of geeks regarding the future of Twitter and they discussed the usage of Twitter at that time.

Usage of Twitter would be like “Updates on Breakfast”, “Upload the picture of their breakfast”, “say Getting bored” or may be “say Good Morning”. Have a look at the picture of Future Man discussing future of twitter with some geeks, 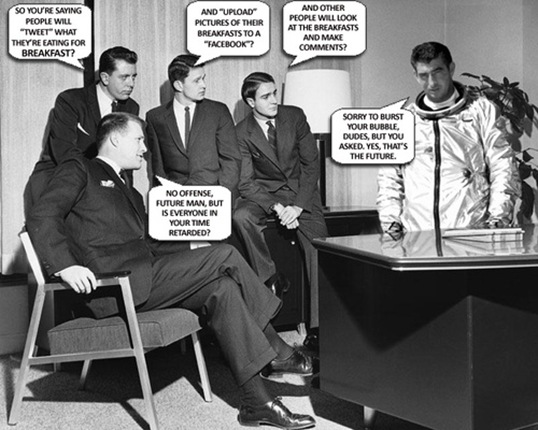 Thanks Maria for sharing this picture. I hope people will love to see the future of twitter guessed by future man in a new way of pictorial representation.