Twitter will Add Time Spent Tweeting in Its New Design

Twitter redesigned its homepage a few days back and now going to track and show time that we spent tweeting. Twitter’s creative designer Doug Bowman has released the preview of twitter page with more stats like time spent tweeting and date and time of joining twitter, percentage relies etc. Doug was previously working for Google and in 2009, Doug joined Twitter’s creative team. Since then, Twitter is always changing its design and options. 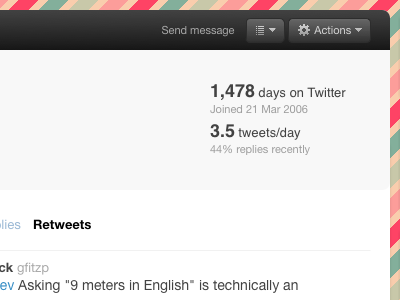 More stats means more information related to the people on Twitter. Details are still awaited for this sneak preview of Twitter new design of showing new stats. Right now we use to see these kind of stats on Twittercounter or any other 3rd party applications but now Twitter is going to add these very soon.