DDoS attack on WordPress.com from China, Millions of Sites Affected

Distributed Denial of Service attack is continuously going on on WordPress.com, and because of that millions of sites are badly affected. The list includes VIP sites like TechCrunch, GigaOM, TED and so on. WordPress.com is a free online blogging solution and it also provide data hosting for major sites.

Here you can see the performance status of products from Automattic, the company which own WordPress.com and its services.

It is important to note that the new backup platform named VaultPress launched by Automattic didn’t feel any heat from this attack. That seems good as I am also using VaultPress for backup purpose for this blog. 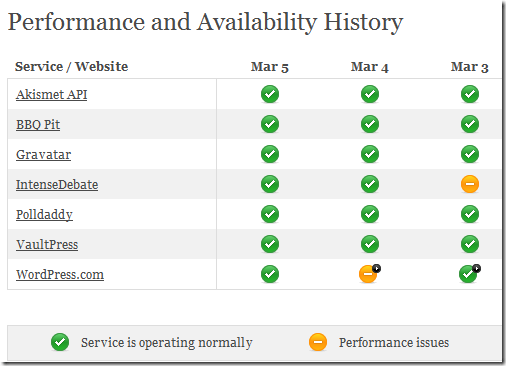 Now WordPress.com serves more than 15 million sites and you can imagine the impact of DDoS attack on such huge provider. People started reporting about the slow response or getting downtime on their WordPress.com site. Here is the tweet from WordPress.com twitter handle which confirms the same.

The first DDos attack happened on March 3, and the second time it came on early morning of March 4. After investigation, it was found that the attack of actually targeted on a particular site and it was politically motivated. Matt Mullenweg, co-founder of Automattic and WordPress told TechCrunch about the issue that 98% attack was originated from China and little bit of Japan and Korea.

What is DDoS Attack?

If you are thinking that what the hell is DDoS attack and how it can bring down the sites like WordPress.com, then here is a brief about DDoS. Distributed Denial of Service is a type of attack on websites to consume the resources of its server or computer to saturate communication with others or to initiate reset for computers/servers. That means in case of DDoS attack, your website host server will get so many requests that it can’t respond or will respond very slowly. Attackers consumes all the resources of your hosting server to saturate the communication with other users.

Update – Now all the sites of WordPress.com are running normally but WordPress.com team is working really hard to avoid such large attacks in future. Fingers crossed.