Here is the screenshot of the new default template delivered with WordPress 3.0 i.e. Twenty Ten 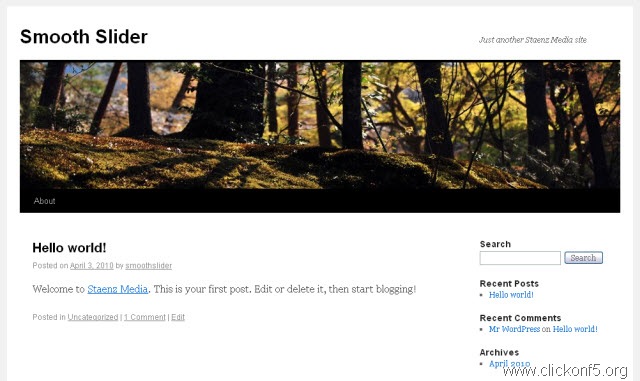 As per the release note,

The custom menus system (Appearance > Menus) is not quite finished. In Beta 2, the layout will be different and a bunch of the functionality will be improved, but we didn’t want to hold things up for this one screen. You can play with making custom menus, and report bugs if you find them, but this is not how the final screen will look/work, so don’t get attached to it.

The merge! Yes, WordPress and WordPress MU have merged. This does not mean that you can suddenly start adding a bunch of new blogs from within your regular WordPress Dashboard. If you’re interested in testing the Super Admin stuff associated with multiple sites, you’ll need some simple directions to get started.

We’re still fiddling with a few small things in the UI, as we were focused on getting the more function-oriented code finished first.

Enjoy the new features provided with WordPress 3.0. Final version of WordPress 3.0 is expected to release in May, 2010.

Sanjeev Mishra is a professional blogger and an Internet Marketing Consultant based in India. He has built the Internet Techies to provide you updates in technology and web application area.
Related ItemsbetaFree DownloadsWordPresswordpress 3.0
← Previous Story Change Permalink of WordPress Without Loosing Previous Backlinks With 301 Redirect
Next Story → WordPress 3.0 Beta 2 Is Ready To Download